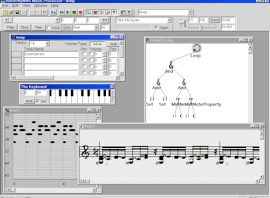 The basic premise behind the ArborRhythms Music Processor is that music can be represented with a tree structure, similar to the syntax of language.  If you are inclined to gory details, you might be interested in the book “A Generative Theory of Tonal Music”, by Lerdahl and Jackendoff.

The name “arbor rhythms” literally means “tree music”.  The ArborRhythms Music Processor was a program which allowed the generation of MIDI music based on a syntactic tree.  It could also process digital audio, and video/text streams were in the works.

The binary here was probably released in 1997, and ran on Windows 95.  It may still run on some versions of Windows.  In any case, it is not supported, and is here only for nostalgic purposes.